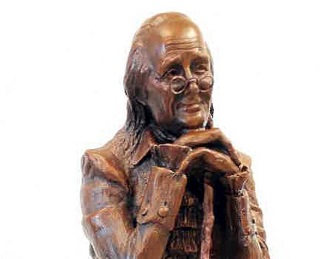 I enjoyed this story out yesterday for a lovely new piece of public art, pictured above, and what I sense is the good-natured whimsy of the town of Arcola, Illinois.

Arcola is embracing its history as The Broomcorn Capital of the World, and has privately commissioned a statue by Jerry McKenna honoring Benjamin Franklin for reportedly bringing a broom home from France and planting some seeds found in it.

I hope to learn more about any published accounts they have referenced (hint). Based on the letters below, I think the corn came from Virginia rather than France. The exact propagation from Virginia through Franklin to Illinois is a matter for further study, but I applaud their adoption of Franklin as the guiding spirit of their tradition.

However it came about, Arcola is now a must-visit town in the triangle between St. Louis, Indianapolis and Chicago. I look forward to learning more about the connection, and hope they will soon sell small models of the life-size statue, like the miniature pictured here.

In the January 1756 Almanack, Franklin extolled a meal made from Indian Corn as a practical military food. Later that same year, Franklin was in Virginia from March 19 to around May 10 on post-office business, receiving an honorary degree from William and Mary in April.

On February 21, 1757, writing from Philadelphia, BF sent his sister Jane Mecom “some whisk-seed” (identified by the Papers as “sorghum vulgare, or broom corn”) that he brought from Virginia. He asked Jane to share some of it with Samuel Cooper and James Bowdoin.

The trip the previous April is the most recent visit of Franklin to Virginia. Sorry to say, I don’t think Benjamin had the time to plant any of the seeds himself, as Arcola legend holds.

As for Cooper and Bowdoin, and why Franklin wanted to send some of the seed to them, that’s another area for future study.

On March 24, 1757, BF sent some of that seed directly to Samuel Ward, and asked him to share some of the tops of it with Catharine Ray, the sister of Samuel’s wife Anna. This was the week before Benjamin sailed to England with his son William to take up lodgings in Craven Street for five years.

On November 25, 1762, BF wrote directly to Catharine [Ray] Green after his November 1st return from England, where William William had recently married. Catharine (Katy) was also now married, and Samuel Ward, had been elected Governor. Franklin sent greetings to all, but did not follow up on the whisk-seed.

The Brooms of Boise

This article from the Idaho Press dated September 13, 2020 picks up Franklin’s broom connection, quoting an 1899 story in the Idaho Statesman that mentioned “a very pleasant little fairy story concerning Benjamin Franklin … . The story goes that Dr. Franklin was examining a whisk broom that had been brought over from England. He found a single seed on the broom, picked it off, planted it, and raised a stalk of corn from which is descended all the broom corn of the United States.”

Again, a certain light-heartedness comes through from 1899 regarding this “pleasant little fairy story” – which, thanks to current resources, we can more specifically connect to Dr. Franklin.