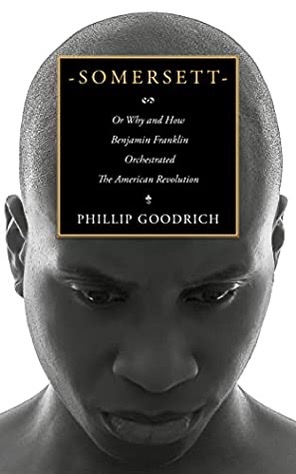 I’m cross-posting my review in GoodReads here of Phillip Goodrich‘s 2019 book, Somersett – Or Why and How Benjamin Franklin Orchestrated The American Revolution.

It’s a darn good story, with a lot of lively historical matters presented, but unreliable while asking us to believe all of it. The author spins an engaging tale of a secret conspiracy across many years, and brings several characters to life, the most memorable to me being Thomas Pownall.

The dramatic scripting of conversations aside, the author considers this piece to be “based on historical fact” and ends his introduction in the upper-case admonition that “this really happened.”

I like vanity in medical doctors and even in authors, but even admitted historical fiction depends on the reader trusting the author to respect the underlying historical facts faithfully.

My personal trust was shaken on the first page where the newspaper started by James Franklin is named as “the Boston Courant” rather than the “New England Courant.” This error is repeated in both the audio and print versions, with endnotes citing two sources that have the correct name, and for me it was like hearing a bicycle horn in a string quartet.

The author’s supports his contempt for Franklin’s unfinished Autobiography by not bothering to name the publisher of the version he refers to, suggesting his 2015 version — perhaps this one — is simply a “reproduction” of the first publication from 1791, which was published in French. Dozens of citations come from the same biography of Franklin.

I admired the author’s initial description of Franklin’s relationship to Margaret Stevenson as “an abiding platonic relationship” on page 30, but in the audio version, Franklin’s later return to her home includes a kind of unmistakable eyebrow waggling suggesting something adulterous, which is a cheap shot often delivered to spice up portrayals of Franklin.

With little inconsistencies like this, little anachronisms in language, and obviously invented stage directions, the author, an actual surgeon, tries to be also a storyteller and a historian that has uncovered a great secret. It’s impossible to know where the faithfully presented historical facts end and the enthusiastic fiction begins.

I notice the artwork on the author’s website has a different subtitle, “Benjamin Franklin and the Masterminding of American Independence.” rather than “Or Why and How Benjamin Franklin Orchestrated the American Revolution.” Perhaps this is the plan for the second edition.