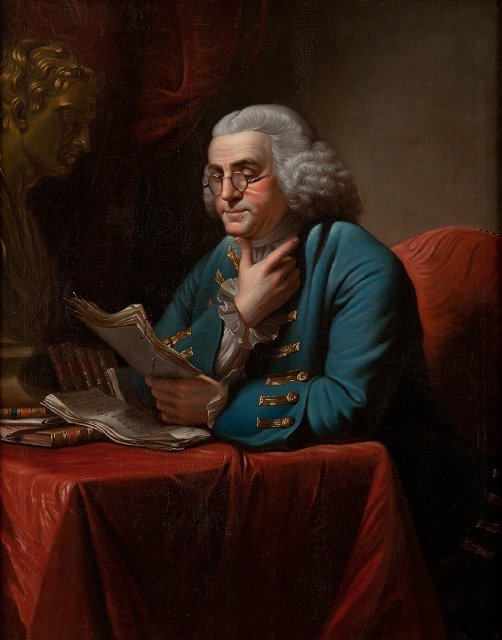 With the pandemic continuing, the American Philosophical Society moved their celebrations this year online, in a series of three events.

As Ali guided us through highlights of this recent exhibit, Michael forwarded the link to the virtual exhibit, inviting us to follow along. So, in addition to viewing it, we could learn this amazing technology better. One sees the exhibit hall as it was laid out while the exhibit was open, with the ability to view particular items close up.

Other links sent in the chat provided the APS At Home Activities (including making money at home), and deeper online documentation of particular objects in the exhibit, including the Crown Soap Recipe, the Peale copy of the Thumb Portrait (above), and that tooth.

A question led to the Franklin side of the Friday topic, introducing this set of posts as a follow-up to the little APS book, Benjamin Franklin and The Art of Eating.

Franklin as Founder and Scientist with Dr. Ezekiel Emanuel

Later that evening, APS presented an excellent online discussion between Patrick Spero and Dr. Ezekiel Emmanuel. Dr. Emmanuel knew little of Franklin when he came to Penn to teach in 2011, but like Franklin himself, he grew. At this point, Dr. Emmanuel has taught the only Franklin course at Penn several times, and recorded 20 of 24 lectures intended for public release on Coursera during 2022.

The main event on Friday is also virtual this year. The theme, under consideration for a few years, is ON FOOD: History, Access, Sustainability, and the Future. As in past celebrations, the morning seminar included speakers not primarily focused on Franklin himself but rather on a topic important to Franklin. What in the past was a morning seminar with three speakers, a procession to Franklin’s grave, and the main honoree speaking at lunch was presented as a single online event.

The morning opened with this three-minute film in which I was pleased to see pictures from earlier celebrations that included Ralph Archbold, Roy Goodman, and my wife Jane and me:

The seminar was moderated by Loree Jones, who spoke about the recent expansion of Philabundance during the pandemic. Marion Nestle spoke of disfunctional food systems that follow our food from growing to surplus/waste food and presented the seven-word motto from Michael Pollan’s In Defense of Food:

Eat Food.
Not too much.
Mostly plants.

The useful distinction of ultra-processed foods was introduced, with a lament that the current USDA Dietary Guidelines avoids the term.

Eric Oberholzer also endorsed the Pollan book, and spoke of regenerative agriculture, “the wonderful world of mushrooms,” and controlled-environment agriculture such as hydroponics.

The takeaway suggestions for the audience included to support local food, eat better every day, learn how to cook, and encourage the USDA to support regenerative agriculture.

Chairman Donald Smith presented the Founder’s Award to Wendell Berry. Mr. Berry, speaking from another location, shared the disdain towards industrial agriculture that was expressed earlier in the day and gave one sentiment that has a proverbial ring to it: “husbandry is the discipline of thrift.”

The event closed with some first-person comments from a Franklin impersonator who was not otherwise identified, as has been the custom since Ralph Archbold was Philadelphia’s leading Franklin.

While the event is not focused on Franklin himself, there was a deeply Franklinian suggestion given. Reflecting that “each of us is on our own path,” but we could all “eat better three times a day”, Mr. Oberholzer urged us all to take “a step in the right direction each day. ” In the traditional group setting, I imagine this setting off a group recitation of this sentence from Poor Richard:

‘Tis true there is much to be done, and perhaps you are weak handed, but stick to it steadily, and you will see great Effects, for constant Dropping wears away Stones, and by Diligence and Patience the Mouse ate in two the Cable; and little Strokes fell great Oaks, as Poor Richard says in his Almanack, the Year I cannot just now remember.

Mr. Smith reported that the event was being recorded and should be available online in a few days at FranklinCelebration.org