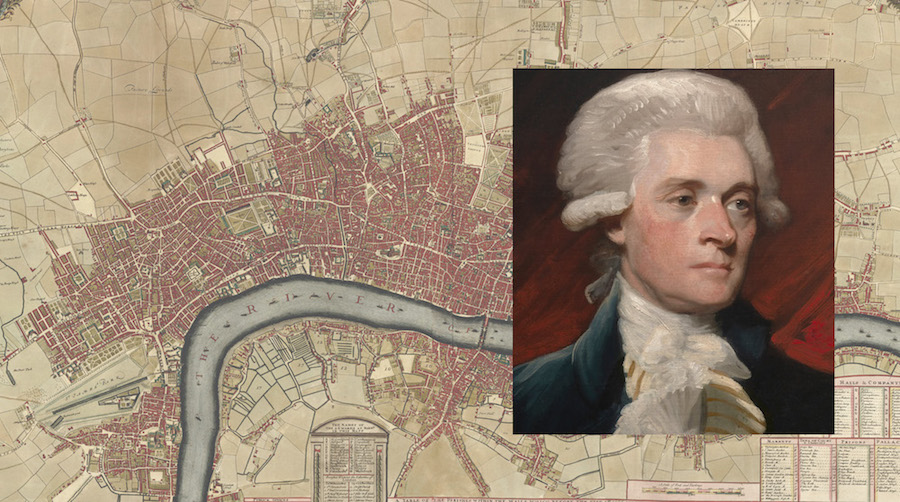 I’ve been  studying the Franklin, Massachusetts library, and reading through the correspondence between Dr. Richard Price and Benjamin Franklin in the 1780s. Their discussion ranges wonderfully — through Georgiana Shipley’s woes, the miracle of compound interest, the Finances of France, nasty reports of chaos in America (discounted by Franklin),  great confusion in England (reported by Price), and balloon aviation. Amid this wonderful correspondence, I find this remarkable mention by Franklin:

Poor Paradise, whom you mention, I respect and pity: But there is no helping him. He seems calculated by Nature for Unhappiness, and will be equally miserable whether with or without his Wife, having no Firmness of Mind. I doubt his Property in Virginia may suffer by his Irresolution. (BF to RP, 8/16/1784)

Franklin sent this 8/16/84 letter c/o Temple, with this postscript:

The Bearer is my Grandson and Secretary, a worthy good Young Man. I beg leave to recommend him to your Civilities, and if convenient I wish he may be introduc’d one Evening to our Club. He stays but a short time in London.

Price had mentioned ” the Club at the London Coffee House which you have so often made happy by your company.”

You probably will remember Mr. Paradise, a friend of Sir Willm. Jones’s and a very worthy man, who has considerable property in Virginia and to whom you have been kind. He has lately been in great trouble. The folly, temper and extravagance of his wife produced for some weeks a Separation between him and her and made him one of the most unhappy men I ever saw. But they are now come together again.

The Papers index by name clarifies:

Jones and Paradise visited Franklin in France in May 1779. On the 2nd of October 1780, Paradise reported to Franklin he was now an American, and sounded far from miserable:

the day when I shall have the happiness of becoming a complete member of an American republick, a day, on which I shall through life reflect with pleasure, and which I therefore am desirous of celebrating with the sincerest joy. What higher pleasure, indeed, can be felt by a man, who may without vanity profess himself a lover of liberty and virtue, than to be admitted as an affectionate and zealous citizen by one of those illustrious states, who by the noblest exertions of unexampled virtue, have established their liberty on the surest basis!

The Wikipedia entry on John Paradise confirms the basics of this man’s existence, but leaves his land holdings and spiritual bankruptcy unmentioned.

The trail heats up through his wife: the Ludwell Blog entry entitled: John Paradise, the First Naturalized U.S. Citizen … features the image used above. The question now moves to this: what happened to John Paradise and Lucy Ludwell between October 1780 and August of 1784? What was their property, and how did it fare?

My congratulations to the Ludwell Blog.