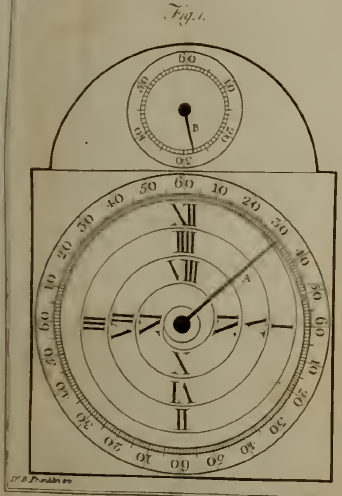 An auction notice caught my eye, about a clock designed by Dr Franklin.

Papers online has this:

A Clock shewing the Hours, Minutes, and Seconds, having only three Wheels and two Pinions in the whole Movement. Invented by Dr.Franklin of Philadelphia.

The dial-plate of this clock is represented by Fig. 1. of Plate I. The hours are engraven in spiral spaces, along two diameters of a circle containing four times 60 minutes. The index A goes round in four hours, and counts the minutes from any hour it has passed by, to the next following hour. The time, as it appears in the figure, is either 32½ minutes past XII, or past IIII, or past VIII; and so on in each quarter of the circle, pointing to the number of minutes after the hours the index last left in its motion. Now, as one can hardly be four hours mistaken in estimating the time, he can always tell the true hour and minute, by looking at the clock, from the time he rises till the time he goes to bed. The small hand B, in the arch at top, goes round once in a minute, and shews the seconds as in a common clock.

This clock is not designed to be wound up by a winch, but to be drawn up like a clock that goes only 30 hours. For this purpose, the line must go over a pulley on the axis of the great wheel, as in a common 30 hour clock. Several clocks have been made according to this ingenious plan of the Doctor’s, and I can affirm, that I have seen one of them, which measures time exceedingly well. The simpler that any machine is, the better it will be allowed to be, by every man of science.

[emphasis added to a great sentence by Mr. Ferguson].

Ferguson’s document is online at archive.org. While it starts with Dr. Franklin’s clock, it goes on to include an astronomical clock (page 19), and others to show the apparent daily Motions of the Sun, Moon, and Stars; with the Times of their rising, etc. A quick browse shows this book to be  beautifully illustrated and full of lively text.