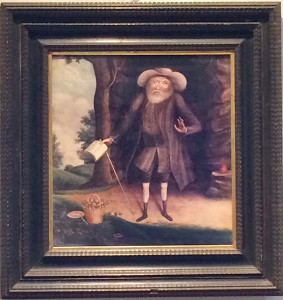 This article discusses a portrait owned by Benjamin Franklin of Benjamin Lay. Some excerpts:

“Stories about our discovery appeared first in the Philadelphia Inquirer, and in January 1979 The Magazine Antiques published a story by Karen M. Jones about the discovery of a rare William Williams painting.” The story quoted a letter from Ben Franklin to Deborah Franklin in which he mentioned the painting. The story also noted an 1810 list of William Williams’s paintings that included a “small portrait of Benjamin Lay for Benjamin Franklin.”
…the portrait of Benjamin Lay was hung at the National Portrait Gallery. The National Portrait Gallery sent it back to Philadelphia in 1999 for the Worldly Goods exhibition at the Philadelphia Museum of Art; it is pictured in the catalog.”