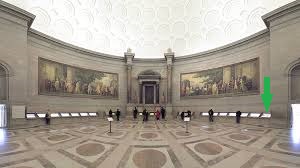 I visited the National Archives on December 12, 2018, and made some notes about the Charters of Freedom display in the Rotunda.

The Rotunda contains 17 display cases. Aside from the three major documents in cases 8-10, each case contains facsimile documents and supporting information on modern placards. Franklin is featured in the display case on the far right, but all 17 display cases are interesting. I’m numbering them as you look into the Rotunda (as in the picture above), from left to right.

The quotes and sources are presented as provided to me by the curator.

(1) Charters of Freedom: The Founding Documents of Our Nation

Liberty, when it begins to take root, is a plant of rapid growth.—George Washington

(2) Declaration of Independence – How Did it Happen?

We are in the very midst of a revolution the most complete, unexpected and remarkable of any in the history of nations. —John Adams

I see here that spelling and capitalization is modernized. The Founders Online publication reads “We are in the very midst of a Revolution, the most compleat, unexpected, and remarkable of any in the History of Nations.”
* I don’t believe the comma after “revolution” actually made it into the display case.

(3) Declaration of Independence: Why is it important?

Educate and inform the whole mass of the people. . . . They are the only sure reliance for the preservation of our liberty.—Thomas Jefferson

(4) Where has the Declaration Been?

On the road with the Declaration of Independence.

. . . all lawful government is founded on the consent of those who are subject to it. —James Wilson

A firm government alone can protect our liberties. —Gouverneur Morris

A slight liberty is taken in punctuation here. The full sentence in the source is “Here, sir, the people govern: Here they act by their immediate representatives.”

(8) The Declaration of Independence

This poor thing is very tired. I cannot see Franklin’s signature, even a little.
Let’s all keep documents out of the sun (see FAQs).

We are now on the right side of the room (that’s not a political statement).

I think we should obtain the confidence of our fellow citizens in proportion as we fortify the rights of the people against the encroachments of the government. —James Madison

This is from JM’s last sentence in this document. The comma after citizens is removed here.

There never was a government over a very extensive country without destroying the liberties of the people. —George Mason

MM Comment: George Mason was objecting to “converting what was formerly confederation, to a consolidated Government.” To see his use of was as an active verb, I see the full sentence, which seems to ramble a bit:

“It is ascertained by history, that there never was a Government, over a very extensive country, without destroying the liberties of the people: History also, supported by the opinions of the best writers, shew us, that monarchy may suit a large territory, and despotic Governments ever so extensive a country; but that popular Governments can only exist in small territories —Is there a single example, on the face of the earth, to support a contrary opinion? Where is there one exception to this general rule? Was there ever an instance of a general National Government extending over so extensive a country, abounding in such a variety of climates, where the people retained their liberty? ”

“If perticuliar care and attention is not paid to the Laidies we are determined to foment a Rebelion, and will not hold ourselves bound by any Laws in which we have no voice, or Representation.” —Abigail Adams (original spelling)

Abigail Adams may be my second favorite writer of the 18th Century. I am also pleased to see “original spelling” embraced, as the Franklin quote I recommend is not exactly punctuated as we might like. It does beg the question, however, why this writer’s spelling is left alone, but the other writer’s spelling is silently updated?

Allen wrote “burthen not your children or your country” – updated silently.

Ending the sentence here is a good thing. Allen’s full sentence goes much longer: “If you love your children, if you love your country, if you love the God of love, clear your hands from slaves, burthen not your children or your country with them, my heart has been sorry for the blood shed of the oppressors, as well as the oppressed, both appear guilty of each others blood, in the sight of him who hath said, he that sheddeth man’s blood, by man shall his blood be shed.”

Featured Artist: Barry Faulkner
Document: a letter from Charles Moore to Mr. Gugler [?], 4/11/1935: “Must [Benjamin Franklin] wear a belt under his protuberant stomach?” — I think the belt was removed, I don’t see it.

Mr. Moore also mocked the Alexander Hamilton cape in the Constitution as showing off the draping more than honoring the wearer.

As I read Lester Gorelick’s article (now in PDF), this letter is dated after the final approval, but I don’t see a belt on either Franklin image today. The Gorelick article is terrific: I never noticed Abraham Lincoln’s face in the storm clouds in the Declaration mural.

(17) Conservation and Access: How are we preserving the Charters?

Facsimile: TJ’s letter to the Secretary of State, December 29, 1801, preserving his papers.

Photo: Conservation of the charters.

Why is it so dark and cold in here? (see FAQs)

Benjamin Franklin was an early champion of independence and a delegate to the Second Continental Congress. He played a critical diplomatic role in France during the Revolutionary War and attended the Constitutional Convention. Toward the end of his life, he was an influential abolitionist and President of the Pennsylvania Abolition Society.

Text on Franklin as noted from the display case, December 2018

Two notes about this quote:

A nation of well-informed men who have been taught to know and prize the rights which God has given them cannot be enslaved. It is in the religion of ignorance that tyranny begins. — Benjamin Franklin

Thanks to the Archives staff for much of this information, and especially volunteer Lester Gorelick for his article cited under case #16 and Alice Kamps for our ongoing discussion.