I noticed something yesterday (1/14/2014) at Christ Church Burial Ground that I had overlooked before. The epitaph for Francis Folger Franklin reads

“FRANCIS F. Son of
Benjamin and Deborah Franklin
Deceased Novr 21st 1736
Aged 4 years 1 month, and 4 days
The delight of all that knew him”

I took this photograph: 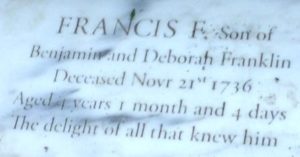 This conflicted with my recollection in the number of days (I recalled “1 day” rather than “4 days”) and the birth date implied (I thought it was October 20th, not the 17th). I checked this morning (1/18/2014) and found the following:

Parton describes the tomb being repaired a few years before 1861 (when the aperture in the wall was made), and Francis’ stone being set up more properly. This was still, of course, the original upright stone.

I discussed some of this with the historian at Christ Church in January 2015 at the annual celebration, and he showed me his copy of a book publishing the contents of each tombstone, and the wording of the current stone matches that one.

On January 12, 2016 I noticed this photo of that earlier marker on Find A Grave, added to the site on July 15, 2005 and used by permission of DeLoss McKnight III: 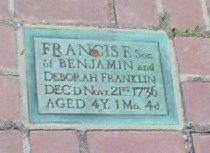 Please note: this plaque was certainly not the original stone, which was quite worn away, and I believe the number of days here was in error.

This 1890 photograph shows the original stone: 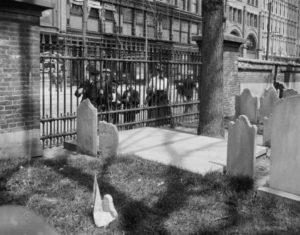 Franklin’s Gravesite in the 1890s

A postcard from the 1930s shows the original old stone: 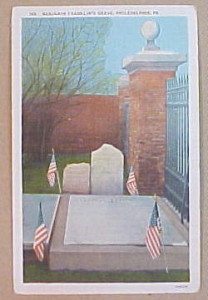 So my questions at this point are

1) When was this flat stone put into place? My current understanding is that the grave site was stabilized in preparation for the Bicentennial in 1976.

2) Do we know what happened to the original upright stone? Several years ago, I discussed this with the current historian at Christ Church, who did not know, but had the nice theory that it was done when the grave site was stabilized, and maybe the Francis stone was “folded into the grave.”

3) What exactly was “the book publishing the contents of each tombstone” published? Is it available? Were the papers preparing for this book preserved? They might clarify the source of the error (a slip of the pen, a misreading of poorly written notes, etc.).

6) To confront this as an error, what was the source for the Papers?

7) In the repair of the crack on Benjamin’s stone between 2014 and 2019, was any evidence of the Francis stone found “folded into the grave” if & when the main stone was lifted?

Comments are welcome by email to marty.mangold@gmail.com.