I am slowly binge-watching episodes of West Wing and notice in Season 6, Episode 20, “In God We Trust” that Franklin shows up in the decorations of people in both parties. It’s a nice compliment that the set designers imagine both these classy characters would want Franklin’s image nearby. 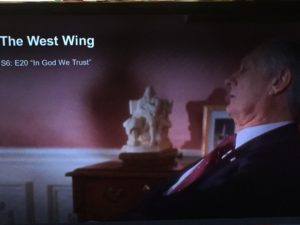 Seated Statuette on the set of West Wing 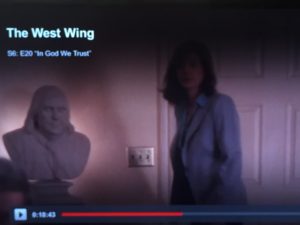 Meanwhile, over in the White House, in the Oval Office of Democratic President Bartlet, we have a bust of Dr. Franklin. The bust, I believe, is by Jean-Jacques Caffieri. The University of Pennsylvania cites the 1777 bust as “Franklin’s preferred likeness of himself.”

I found the seated statuette on eBay (it got away from me). 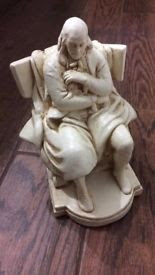 Update: August 5, 2020
The seated statuette is a copy of the James Earle Fraser statue at the headquarters of the Franklin Life Insurance Company, Springfield, Illinois, dedicated in 1949.  There is a photo of that statue in our Franklin Gazette, Volume 2, #2, from Spring 1991 — here’s a better photo. The statue is also entitled The Apostle of Thrift and Patron Saint. The statue, at least two Franklin quotes, are still with the building at 815 S. 6th Street in Springfield, now the headquarters of the Illinois State Police (Google Map Image, 2020).

For a heartwarming personal connection to this statue, please see From One Statue To Another.

This is the first Bumping into Benjamin Franklin entry. I will be sharing the frequent experience of connecting to Franklin while not directly looking for him. Thanks for reading!